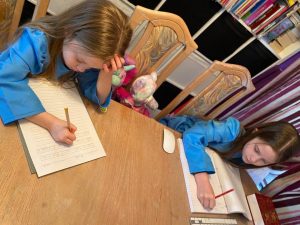 As lockdown restrictions have been eased under the first step of the roadmap, parents in Northampton have told of their mixed emotions when sending their children back to school again after months at home together.

Since March 23, 2020, most children and parents alike in Northampton have been thrown into an on-off alien world of homeschooling.

And the reality for some parents who are working from home, while sharing the kitchen table with their youngsters, has been a virtually impossible task.

But for other parents, they have cherished every moment of watching their young children flourish and learn new life-changing skills. Mum, Jenny Highton, is one of them.

She says herself that she is in a fortunate position as a mum where her partner works full time and she works on weekends, after giving up her weekday hours to be at home with her two daughters, Carly, 7, and Lydia, 5.

She said: “I really enjoyed working with them, completing everything set by the school and adding our own extra curricular activities, such as baking and cooking, walks and bike rides.

“The girls were also taking part in Zoom gymnastics training with their club. I absolutely loved seeing how much they learn, in particular how far the little one has come, compared with this time last year when I first started all this, and the big one’s confidence when doing her school work, which isn’t always present with other things.”

But she was feeling upset to be sending her daughter’s back on Monday and concerned over their safety, as two family members in their household have respiratory conditions.

She added: “I was absolutely gutted sending them back to school on Monday, partly due to missing them and missing out on seeing what they’re doing each day – but also due to mine and my five year old’s asthma.

“It’s a very scary time and having kept us all safe for this long I’m still a little nervous with them being around so many people.

“They were both looking forward to seeing their friends again, and their teachers, but neither were happy about having to wake up early again…

“The youngest went in no problem but the eldest was a little apprehensive about little things such as where she would be sitting, who she would sit with and what she would have for lunch but they both came home very happy.

“They’ve told me how they’ve been washing their hands and keeping their distance from other bubbles.

“They were absolutely exhausted yesterday and we have all missed each other like mad.”

Then there’s the teachers who are working from home who have their own students to teach and their own children’s education to factor into their days.

For Callum Stoner, luckily his children are not too young. He said: “Thankfully my children were old enough to cope with minimal supervision.

“Teaching my own children as well as my students would have been challenging to say the least. Hats off to my colleagues and fellow teachers with young children. You’ve done a terrific job.”

Stacey Mallendane is also a mum who is working from home full time and said her experience of teaching her son, Edward, 5, wasn’t too challenging as he is in reception.

She said: “My son’s writing improved significantly with the 1-2-1 help and for the most part he was enthusiastic to do the work, but he missed his friends and his teachers so much.

“After the announcement to go back, we made a little chart which he ticked off each day and he was super excited on Monday.

“He went back into school without a backward glance and had the best day. To see him so excited and not fighting to get dressed for the first time in two months was lovely. For me, he’d been in nursery since five and half months old and so us not being together in the day is standard for both of us, so it wasn’t tough at all.

“I’m pleased he’s back because the schools are safe, and he loves being surrounded by other children, but I will miss being so involved with his schooling as I really enjoyed it.”