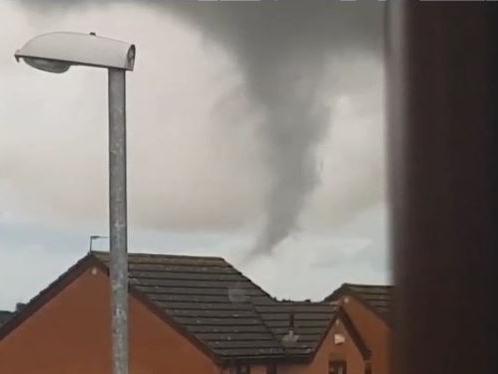 A funnel cloud has been spotted in the stormy skies over Northampton this evening.

The swirl formed at around 8pm on Saturday and was captured in a spectacular video by a stunned Chronicle & Echo reader in Kingsthorpe.

Although often referred to as tornados, the Met Office confirmed the spinning, cone-shaped clouds only became tornados if they touch ground.

A Met Office spokesman said: “Funnel clouds are cone-shaped clouds which extend from the base of a cloud towards the ground without actually reaching the surface below.

“In the UK they often look like thin dangling bits of rope, hanging from the cloud above. But in hotspots such as tornado alley in the USA, funnel clouds can sometimes be thicker and much more intense.

“The form when a rotating column of wind draws in cloud droplets, making a region of intense low pressure visible. They are formed in the same way as a tornado building around this localised area of intensely low pressure and are typically associated with the formation of cumulonimbus thunderclouds.

“If a funnel cloud does make contact with the ground and produce a tornado, very strong winds can be expected in the immediate vicinity of the vortex potentially causing severe damage.

“In a typical year, the UK sees around 30-35 tornadoes each year, though it is very rare that are they strong enough to cause any significant damage.”