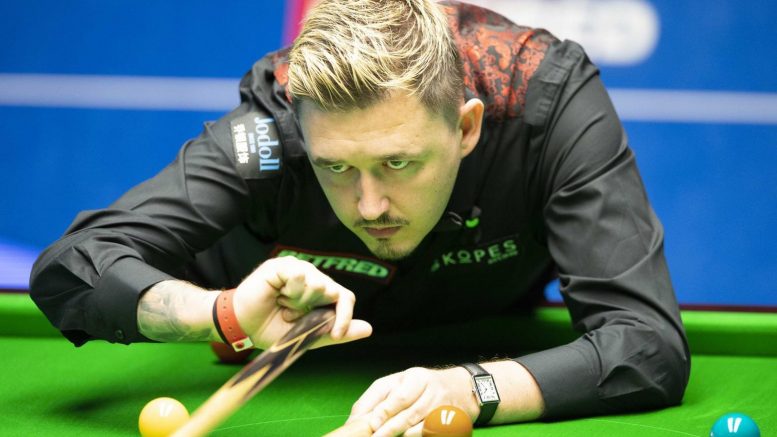 Kettering’s Kyren Wilson has reached the final of the Betfred World Championship for the first time in his career.

The world number eight scraped over the line by the narrowest of margins in one of the most dramatic semi-finals as he edged out Anthony McGill 17-16 at the Crucible in Sheffield.

Wilson’s hopes looked to be fading when he fell 16-15 behind but he levelled the match and then followed an incredible deciding frame, which was ultimately won by a fluke on the green which left the Kettering man an emotional wreck.

He eventually regained his composure to roll in the pink to seal the deal and he will now face either Ronnie O’Sullivan or Mark Selby in the showpiece, which gets under way tomorrow (Saturday) and concludes on Sunday.

And Wilson struggled to find the words in his emotional post-match interview.

“I didn’t keep myself together, that’s what I am most annoyed about,” he said.

“I didn’t feel like I was quite there today, I thought Anthony was absolutely phenomenal. I put him straight under pressure to go three frames ahead and he just stuck it up me basically.

“It’s a cruel game. I have dreamt of this moment, I didn’t want to get there like this but every credit to Anthony and I am sure he will be back.

“I am in a really good place mentally, I am just enjoying being a part of this World Championship. With everything going on in the world, this is a bonus being here.

“I felt like it was one of the best semi-finals ever at the Crucible. It was such a good standard.

“We are still a long way from what I want to achieve and I am going to have to go some to beat whoever I have to play in the final.

“But I am a fighter and I will give it my all.”

There was little sign of the drama that would follow when Wilson extended his overnight advantage with a fine break of 94 in the opening frame of the session.

But McGill produced some tremendous snooker after that with breaks of 84, 87 and 122 making it 14-14 at the interval.

Wilson went back in front with a break of 82 in the next but McGill battled back again and won the next two frames to go 16-15 up and to within one of victory.

Wilson showed his mettle to level things up and take it into a decider, which couldn’t have been more dramatic.

The Kettering man looked to have missed his chance when he missed a straightforward red into the middle but the drama was only just starting as he got a reprieve and then trapped McGill in a snooker behind the yellow.

After a number of attempts, the game looked to have swung Wilson’s way but more fouls left the doors open until the fluked green put things out of reach for McGill.