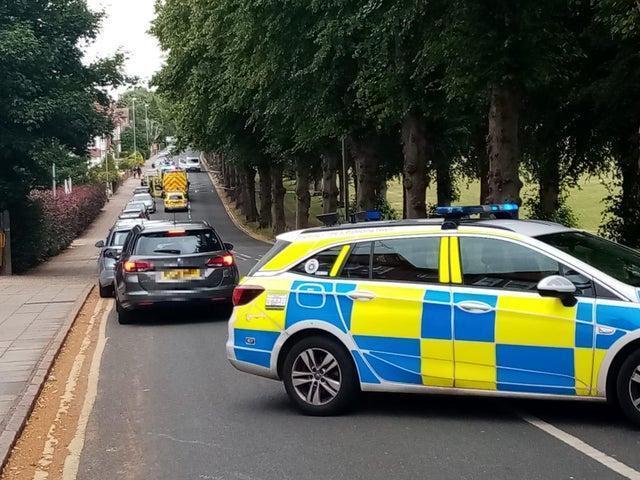 10.50am — Police and paramedics rush to an area of the Racecourse in Northampton following a 999 call reporting that a man has been assaulted.

A Northamptonshire Police spokeswoman said: “We are currently dealing with an incident in St George’s Avenue, Northampton near the Racecourse. The road is currently shut and we are advising people to avoid the area.”

1.42pm — It is confirmed the East Midlands Ambulance paramedics battled to save a man who had been stabbed but were unable to save him and he died a short time after.

St George’s Avenue remains closed as motorists and pedestrians are warned to avoid the area. Large sections of the Racecourse is also cordoned off.

One resident close to the scene said: “We get ambulances down here often because of the care home, but we suddenly heard one after another and we knew something had happened.

7.38pm — Supt Kevin Mulligan posts a video online reassuring locals following a similar attack in Reading recently and confirming the Northampton incident is not being treated as terror-related.

Supt Mulligan says: “Officers from the neighbourhood teams are visiting the community groups and residents to give them the reassurance that we will remain here and work with them and reassure them this is a one-off event.”

DI Long says: “If you were at the Racecourse between 9.30am and 11am, please call us on 101. If you weren’t but still think you have any information that could help us, please also call or if you would rather pass your information to us anonymously, please call Crimestoppers on 0800 555111.

“Similarly, if you have any dashcam or CCTV footage you think might assist our investigation, please send it to us.

“Detectives from across the region continue to work around the clock on this investigation and specialist officers have been deployed to the family of our victim to support them at this highly distressing time.

Police also reveal the two men arrested in connection with the incident have both been released without charge.

DI Long says: “We are continuing to keep an open mind with regards to the motive behind Daniel’s death.”