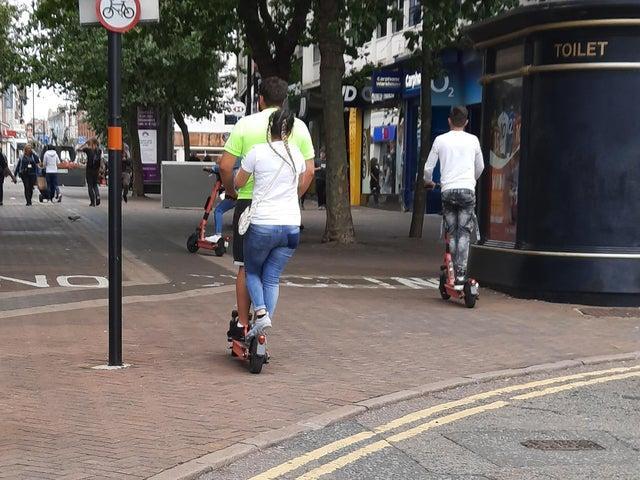 Scooters being ridden in pedestrianised areas are causing issues for shoppers

County Council chiefs have no plans to suspend trials of electric scooters in Northampton despite Midlands neighbours Coventry halted its scheme after just five days.

Similar trials were launched in Milton Keynes and Middlesbrough, where two teenagers were caught by police riding scooters illegally at 12mph on a 70mph dual carriageway.

But an Angel Square spokesman said: “There are no plans to pause the trial in Northampton.

“This is an exciting scheme for the town, we were chosen by the government to be one of the first trial areas for e-scooters which can be a real boost to improving access to greener, more sustainable and affordable transport and offering more choice on how to travel.

“But with any new scheme there is always a bedding in period, so we are continuing to listen to feedback and alongside Voi are closely monitoring how it’s going to see where we can keep making improvements to help it run as smoothly as possible.”

Coventry put the brakes on its own scheme on Monday after incidents of the scooters being ridden at up to 15mph through pedestrianised areas.

The e-scooters were launched in Northampton two weeks ago. Photo: Kirsty Edmonds

A spokesman for the City Council added: “The trial has been introduced to identify the safest way that e-scooters can be used going forward so it’s right to pause the scheme if concerns are being raised.

“The initial take-up has been encouraging but we need to ensure that the safety of all people using the city centre is protected and that the e-scooters are used in the proper way, hence our decision to pause the pilot until systems are improved.’

The Swedish company behind the trials, Voi, said in a statement: “While we regret the pause to our service, we reiterate our desire and willingness to work with all local stakeholders to deliver a safe and successful trial that meets the council’s objectives and confirms micromobility as a sustainable, safe and attractive mode for Coventry’s citizens.”

Voi e-scooters were trumpeted in Northampton as a clean alternative to using the car or bus with 300 made available to rent.

But the scheme has been criticised by councillors and the public over dangers the e-scooters pose to town centre pedestrians when they are being misused.

Launching the scheme, County Council cabinet member for Highways and Place, Jason Smithers, said: “Northamptonshire is committed to improving access to greener, more sustainable, more affordable transport for the benefit of everyone.

“In the short-term ‘post-lockdown’, we are keen to see how the use of e-scooters can help people get back to work, education and training, especially with capacity restricted on public transport.”

‘It was wonderful’: Places of worship around Northampton welcome back congregations after lockdown