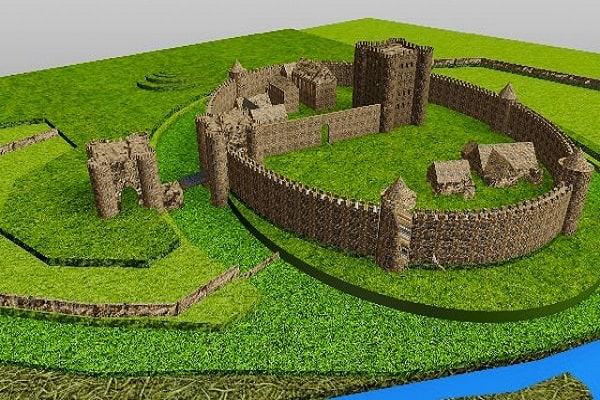 At Northampton there was once a massive and important Castle, with substantial defences and so important that parliament was held there during the mediaeval period. It was the first major Norman Castle a day’s ride from London. The favourite castle of King John, who visited 30 times, he moved his royal treasury to the Castle in 1205, and the Castle was associated with a mint for coins of the realm. Tournaments and feast days were held at the Castle, and the trial of the “troublesome priest” Thomas Becket was held at the Castle. It was built (probably atop original Saxon defences) first from wood then from the distinctive sandstone which can be seen to this day in various buildings about the town (probably pilfered from the Castle ruins!).

Soon after the Romans left Britain in 410, Northampton was establishing itself as a local seat of power with Saxon defenses near the site of the Castle and St Peter’s church. There were Saxon buildings in the area around Sol Central and St. Peter’s church, and by the early 11th century, Northampton had connections to powerful people of the time.

A Castle For Northampton

In the 11th century the Castle was built and rapidly became an important royal establishment, with parliaments, trials, tournaments and feasts being held at the site, with the Castle also forming a key part of the town’s defences.

The Castle in Modern Times
The Castle site now spans between vacant land and Northampton’s “Castle” Station. Excavations were last performed during the 1960s, and some foundations remain below the surface, offering a tantalising opportunity to learn more about this under-appreciated part of local and national history.