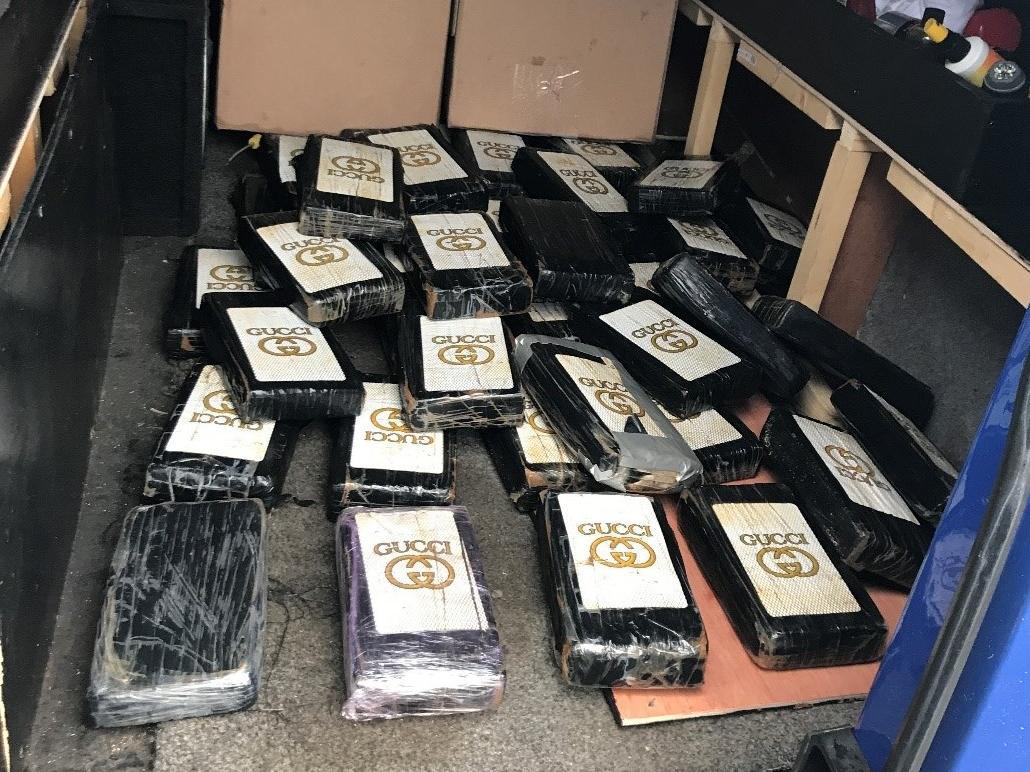 A Northampton man has been jailed after police caught him driving a van carrying more than £5 million worth of cocaine covered in Gucci branding.

The 31-year-old, of Moat Place, pleaded guilty to possessing criminal property and conspiracy to supply class A drugs between July 2018 and July 2019 on February 11.

The stash of 45 1kg blocks of cocaine, worth £5.7 million, found in Nabil Chaudhry’s van by police. Photo: Metropolitan Police

Detective Inspector Glenn Butler, from the Met, said: “I am proud of the dedication and proactivity of my teams which has resulted in this sentence today.

“The detection of this criminality should send a warning to anyone considering carrying out similar acts that we will use all powers available to us to bring you to justice.”

Chaudhry was arrested as the result of an intelligence-led investigation carried out by detectives from the Met’s specialist crime command team.

Plain-clothed officers stopped approached him after he arrived at a petrol station on the A1 in Doncaster, South Yorkshire, in a van on July 20, 2019.

Chaudhry attempted to escape, fighting the officers as he tried to re-enter his vehicle – he initially refused to hand over the keys but officers managed to obtain them after arresting him.

Purpose-built panelling had been screwed into the rear of the van, behind which officers discovered 45 individually wrapped 1kg blocks.

They were later found to contain cocaine, with an estimated street value of approximately £5.7 million.

Following an examination of his encrypted device, further evidence was obtained of Chaudhry being involved in the distribution of a further 75kg of class A drugs.

Financial enquiries showed that nearly £50,000 of cash deposits were made into his current account that were unaccounted for.

Det Insp Butler added: “The drugs being carried in this vehicle were believed to be destined for distribution on the streets of London.

“There is an undeniable link between drug supply and violence, much of which we have witnessed across the capital in recent months.

“By intercepting the delivery of millions of pounds worth of Class A drugs, I am confident we have prevented harm coming to Londoners, and those who choose to visit our city.”