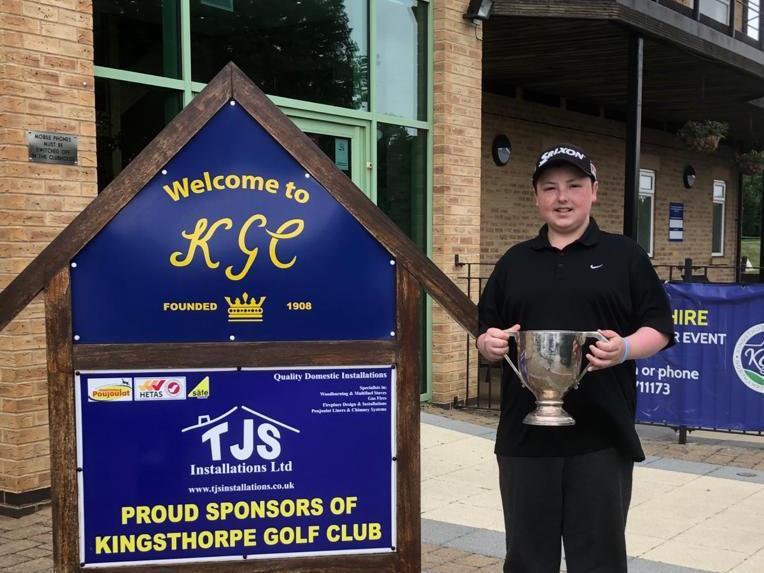 A teenager who has been in and out of hospital for two years fighting cancer has won a two-day adult golf tournament.

Sam Dunkley beat off the rest of the competition at Kingsthorpe Golf Club as he shot a net score of 68 on Saturday (July 4) and net 60 on Sunday (July 5), despite having very little practice during the last two years.

The 14-year-old from Far Cotton, who played off a handicap of 33 last weekend, was diagnosed with leukaemia in January 2018 after he broke his elbow a few days after starting secondary school.

Sam Dunkley, who is 14, won a men’s golf tournament over the weekend.

Since then, Sam has undergone chemotherapy, radiotherapy, a trial drug and bone marrow transplants and has spent long periods of time in hospitals in both Nottingham and Sheffield.

Although he has not yet rang the bell to say he is in remission, Sam has been well enough to shield at home with his parents during the coronavirus pandemic, where he was able to get back into golf once again.

Sam’s mum, Sarah, said: “When we went to Sheffield for the bone marrow transplant, we were supposed to be there for ten weeks, but it didn’t work to start with so we were there for five and a half months.

“It was a tough time and Sam was really poorly.

Sam has been playing since he was five.

“We nearly lost him a few times. He was touch and go.

“He even spent his thirteenth birthday there and Christmas, but we had so much support.

“We had something like 365 cards sent up from friends that we put all over the wall.”

While he was in hospital, Sam also received a card from Ian Poulter and was visited by golfer and Sheffield local Matthew Fitzpatrick.

Although he is still receiving treatment, Sam was able to go back to school part-time in September last year.

Sarah added: “His cancer treatment continues and he has been diagnosed with a bone cyst that affects his walking so we have to keep going back to Birmingham for that.

“There will always be something, but he has done so well and he has loved being back playing golf.

“He even put up a marquee in the garden to use as a golf net and has been practicing during lockdown.”

Sam has been playing since he was five, so was glad to be back and was ‘chuffed’ to have won the tournament, especially after lockdown.

His net score of 60 is thought to be one of the lowest ever on the local course and has resulted in Sam now playing off a reduced handicap of 24.

“It’s not bad considering he has not played golf for probably more than two years”, Sarah continued.

“Before he was diagnosed with leukaemia he was getting so good and all the kids he was playing with went on are doing really well, but he was just stuck where he was.

“So the fact that he has won this is amazing and I’m so proud of him.”