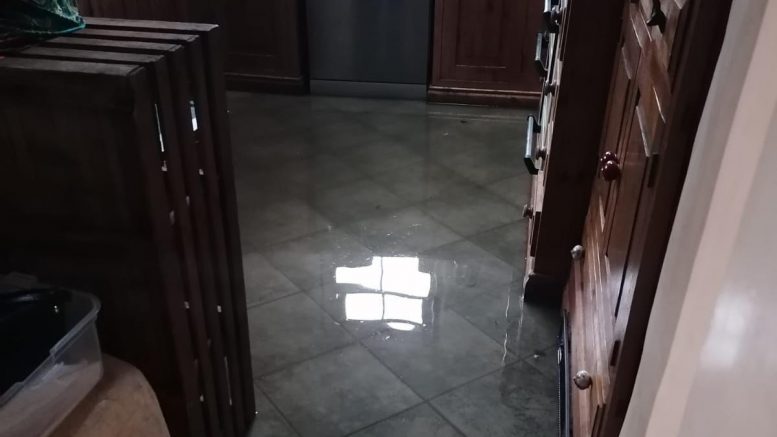 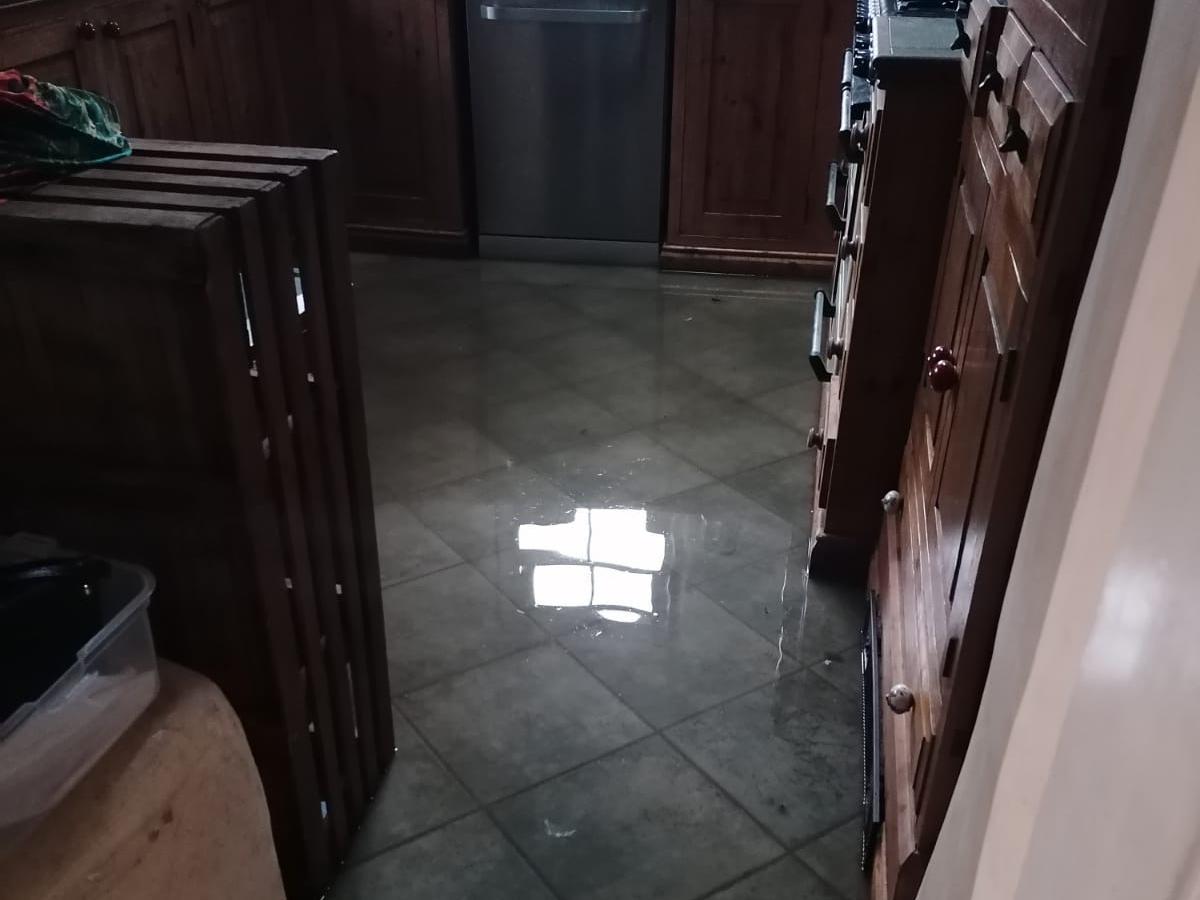 A Raunds woman has been left counting the cost after a wave of sewage swept through the property leaving residue of human waste in her home after torrential rain burst drains.

The cascade rain mixed with waste water and poured into Helen Thorne’s house through all five doors of the 17th Century converted farmhouse in North Street contaminating carpets, furniture, possessions and electrical goods.

Storms affected a large number of properties across North Northamptonshire on Sunday, August 16, devastating businesses in Wellingborough, and homes in towns and villages causing thousands of pounds worth of damage. .

Ms Thorne, who lives with her 87-year-old grandmother and disabled seven-year-old son, was at home with her best friend enjoying a relaxing afternoon when the floodwater rapidly built up in the road next to her house.

She said: “My entire home was flooded, resulting in catastrophic damage not only to property and possessions but to vulnerable people I care for within my home.

“All three gullies were blocked. One of the gullies is mis-connected into the foul drain sending sewer water into my home. It sent contaminated product through my house.

“Cars, children and bikes have also been spreading the contamination through the area. I want it to be fixed. I want it rectified.

“I will be working to seek compensation. I don’t care less whose fault it is.

“This is the fourth time in less than three years that my home has flooded. I want this sorting.”

Best friend Cheryl Winterflood said: “We were in the ‘den’ and we noticed it was raining but it didn’t seem that much. We noticed a puddle on the doorstep and I sent my daughter to fetch a newspaper to mop it up. She came back and said there was a big puddle near the back door. We went to check it out, went to the front door and we could literally see it rising in front of our eyes.

“The water was rising on three sides of the house. We couldn’t open the back door, we were getting it from every direction.”

Helen with her son Archie, 7, and grandmother June Norman

Ms Thorne’s son had to sit on the sideboard as the water rose up to 18 cm (seven inches) in the house, holding his pet cat to keep it safe. Flood water reached a depth of 30cm (12 inches) in the garden.

Grandmother June Norman, who lives in her own suite of rooms on the ground floor, has been unable to move upstairs due to mobility problems.

The new living room carpet in her ‘granny flat’ will have to be removed despite being professionally cleaned twice and her bedroom and ensuite wet room have had to be replaced due to the toilet overflowing after the flood.

Mrs Norman, 87, said: “It was terrible. It was like a lake, we had little tidal waves in the house.”

Ms Thorne, 40, a business manager, arranged for Anglian Water and Northamptonshire County Council Highways representatives to visit the property where she has lived for four years to explain her problem to the agencies responsible for sewerage and drains.

Joining the meeting was neighbour and East Northants district councillor Glenvil Greenwood-Smith who has lived opposite the property where Ms Thorne now lives for 34 years.

He said: “It floods regularly but we come to accept it and live with it. We have built up the garden.

“Raunds is known to Anglian Water. It is vulnerable. There is a conglomeration of different drains here.”

Ms Thorne, who has high blood pressure and lives with a heart condition, has vowed to continue her fight for answers.

She said: “I have been fighting with the Highways and Anglian Water over and over to get this fixed, and each time we have flooded they are too distracted with playing the blame game against each other and I have to pay thousands out to repair and replace my home.

“As a single mother, especially with the level of damage from this time around of being flooded I simply do not have the means, and my insurance won’t cover it due to the flooding history. Therefore myself, my disabled son, and my elderly grandmother are left to live in this.

“I am hoping to seek advice from the Disability Discrimination Act 1995 also, as all parties have been repeatedly made aware that I have a disabled son, an elderly grandmother with a multitude of health conditions, and myself I have serious heart and blood pressure problems.”

A report sent to Ms Thorne and shown to the Northants Telegraph revealed that a CCTV inspection showed investigations in the surface water system had been identified as ‘non AW (Anglian Water) responsibility road gullies blocked on both inlet and outlet’ and that a gully at the side of neighbouring property ‘is cross connected into [the] foul water sewer’.

The report also highlighted that the culverts and ditch lines down Brick Kiln Road were poorly maintained with ‘the culverts not running at all’ in turn causing ‘the ditch line to over fill and run down to North Street’ causing the foul water sewer to become overloaded due to cross-connected surface water gullies.

An Anglian Water spokesman said: “Road drains and gullies are the responsibility of the local authority. In this instance, a road drain had been wrongly connected to our sewer network and had been overwhelmed by the recent heavy rainfall, unfortunately flooding a customer’s property nearby. Our teams have now completed a clean-up of the property.

“We are working with the local council to identify any further blockages and misconnections in the area so they can be rectified in order to reduce the likelihood of this happening again.

“Following previous wet weather earlier this year, our teams completed extensive CCTV and cleaning work of the sewer network in and around Raunds to check our network was operating as it should.

“Flooding is an extremely complex issue with many different owners for the drainage networks such as Highways, local councils, private owners, as well as ourselves. We work closely with all authorities who have responsibility for drainage.”

Ms Thorne added: “This flood was by far the worst, and furthermore neither the Highways nor Anglian water would assist us, despite repeated pleas for support knowing this was caused by the draining issues. The three of us had to live surrounded by contaminated water – foul had mixed with surface – with all parties refusing to help and instead blaming each other.

“Ultimately, further investigations have confirmed all three drainage systems were indeed blocked and the third is in fact a surface drain that has been misconnected to a foul drain, which also being blocked pushes all the foul ‘product’ up into the street when there is heavy rainfall.

“Still no one is willing to take action and they resort to passing blame, while my ill Grandmother, disabled son and myself are left to sit in amongst contaminated product that has been flooded through, remaining very exposed to sickness and infection.

“I have been fighting with the Highways and Anglian Water over and over to get this fixed, and each time we have flooded they are too distracted with playing the blame game against each other and I have to pay thousands out to repair and replace my home.”

Message from the editor: Thank you for reading this story on our website. While I have your attention, I also have an important request to make of you.

Can you find a hidden war bunker? These UK areas are thought to have the most