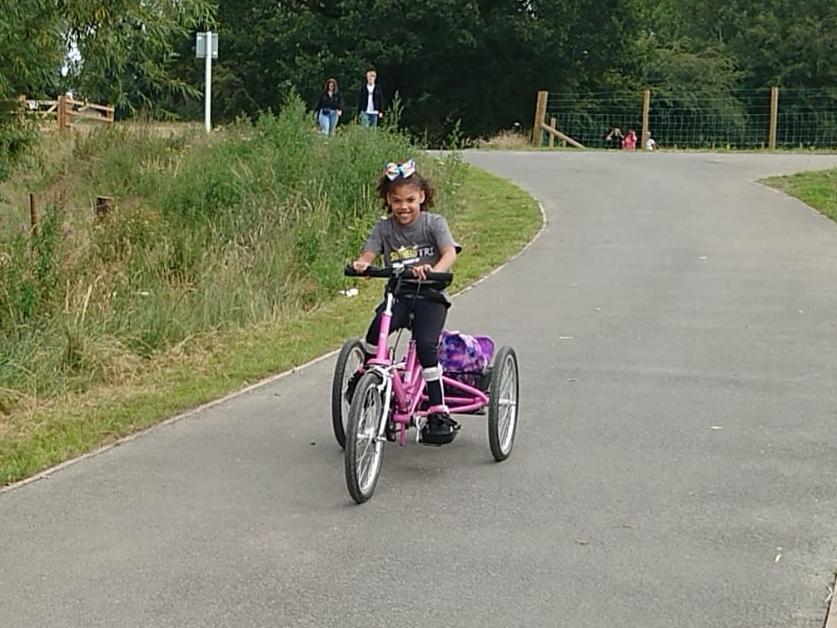 A seven-year-old girl who has cerebral palsy has completed a superhero challenge with her family to raise funds for her much needed therapy.

Kelis Broomes, who has quadriplegia cerebral palsy, was told at the age of five days old that she either would not live, or if she does, she would be in a ‘vegetative state’.

Years on and ‘against the odds’, intensive physiotherapy as well as other therapies give Kelis the chance of independence.

Kelis has completed a 20km challenge.

The therapies come at a huge cost, so Kelis’ family from Upton decided to take on a challenge to raise some funds.

Usually a triathlon event, the Superhero Series, which is the UK’s only disability sport series had to be launched ‘at home’ due to the pandemic.

Participants have to complete at least 20km over the course of a month.

On her specialised bike, Kelis, alongside her mum, Helen and older brother, Curtis, managed 27km in four rides, including one ride dressed as a superhero.

Helen said: “Kelis loves cycling so it was great to get her involved in the Superhero at home challenge, especially as her brother could do that with her too.

“Each time we managed around 6km, but her brother missed the third time so we did another ride so we all completed more than 20km.

“She has really enjoyed and getting back to therapy after lockdown has really made a difference.

“It also helps her to concentrate on more than one thing at once. It has really helped her concentration.

One of the rides included a superhero outfit.

“This challenge has proved to Kelis just how far she has come and how much she has achieved, against all odds.”

The family initially set out to raise £200, but has already hit more than £300, which will go towards the costs of Kelis’ extensive and intensive therapies, which Helen estimates to cost around £8,000 a year.

Helen added: “Everyone has been so generous and we want to thank everyone who has already donated.

“Any funds raised will go straight back into Kelis’ therapy funds so that she can continue smashing through the milestones we were once told she would never meet.”

The whole family got involved in the challenge.